How Much Is Ineffective Communication Costing Your Company? 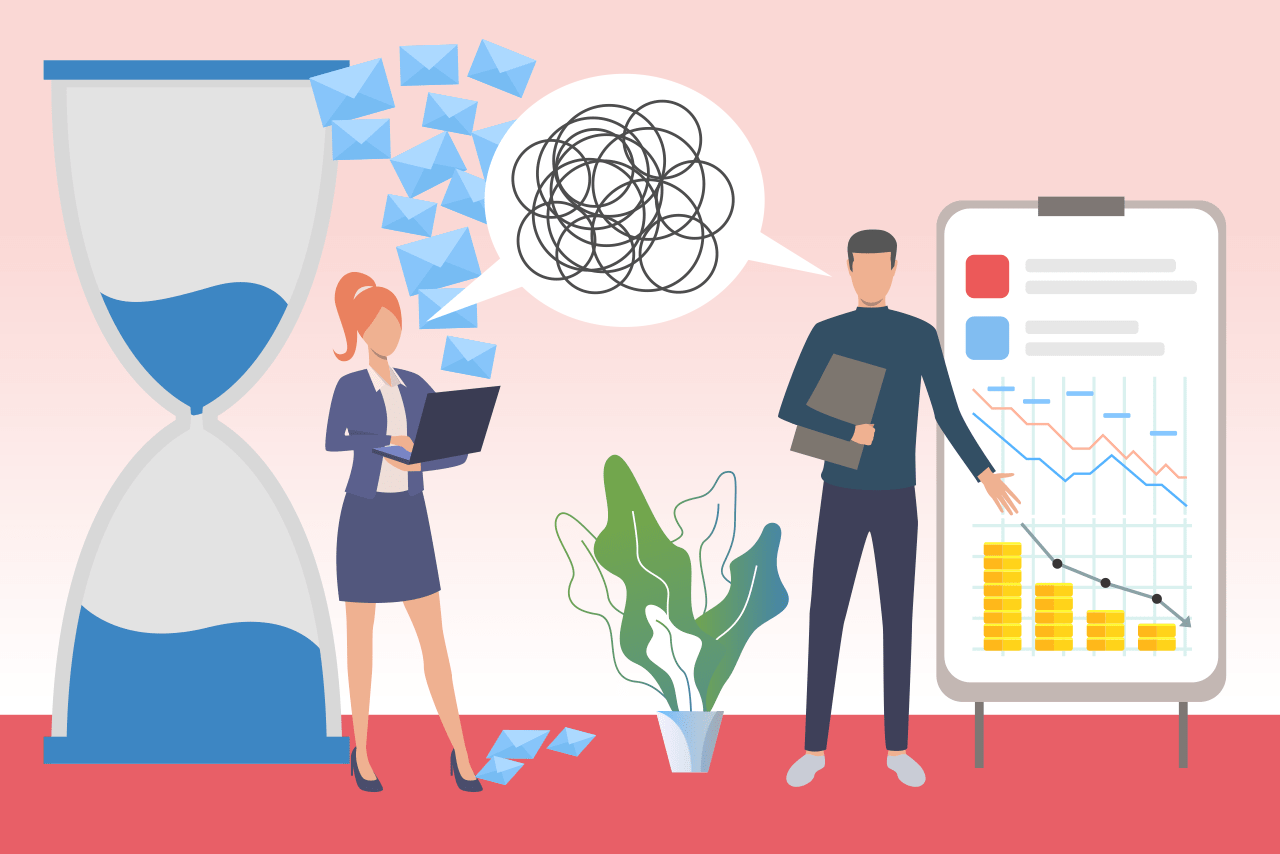 Every aspect of business has productivity components that can be measured and quantified in some way. The more productive and cost-effective your organization is, the better it will perform financially.

Unproductive, poorly-performing organizations lag behind their competitors and, in the worst-case scenario, can cease to exist altogether.

Internal communication is an essential aspect of any well-run business. It’s important that employees are kept in the loop and understand the company’s key objectives and are told the relevant information, in a timely manner, so that they can do their jobs properly.

But, unfortunately, the internal communication system in many organizations is just not up to scratch. In some businesses, there is little or poor internal communication. While in others there are systems in place, but they’re just not performing very well… and can be contributing to productivity inefficiencies in many different ways.

Email is a tool that many businesses rely on for internal communications, first and foremost, to relay important information to employees. Unfortunately, in the modern office, it has become a point of frustration for many workers who feel as though they are bombarded with constant information that they simply can’t keep up with.

According to a recent report from the Radicati Group, the number of emails sent around the world every single day is 293.6 billion in 2019 – predicted to grow to 347.3 billion every day by 2023.

There have been numerous studies in recent years about productivity inefficiencies caused by email.

It’s estimated that the average office worker receives at least 121 new emails every single day. Many of these go unopened and unread and can become lost and buried in inboxes as the employee simply may not have time to open and react to or respond to every new item that arrives in the inbox.

A McKinsey study found that the average office professional spends around 28% of their day at work reading and responding to emails which equates to 2.6 hours of every single workday.

Many emails that are sent are corporate spam or marketing materials. Other times they might be sent to the entire organization, such as an outage notification for a particular software program that should have only been directed to a specific group of employees.  Many workers CC or BCC in multiple people who don’t need to be included in the email in the first place. Other times someone will respond everyone CC’d in on an email with a short, irrelevant answer like “thanks!”.   These all add up, every single day.

The constant interruption of new emails arriving is distracting for many workers and can cause them to lose focus on the task they were initially performing when the new email arrived.

Gallup research found that email was one of the biggest sources of workplace disruption that leave workers feeling as though they aren’t getting through the tasks on their “to-do” lists as quickly as they would like each day.

The research suggests that it can take a worker as long as 23 minutes and 15 seconds to completely refocus on the original task when they’ve been interrupted… one of the perils of our multi-tasking modern work culture.

A more conservative estimate from Loughborough University suggests it can be at least 64 seconds for employees to return to a task with the same attention span as they left it after being interrupted by a new email.

These constant interruptions have a cost… time spent dealing with emails is time your employees aren’t spent dealing with  your organization’s core business… and unless they are responding to sales queries and answering clients, it’s likely they aren’t making any money for the business in those wasted hours every day.

Dr. Ian M. Paul, a Penn State College of Medicine pediatrician, recently carried out a study on email and tracked all of his emails over an academic year. He discovered that in that time he received 2,035 mass distribution emails which included 1,501 from the medical center, another 450 from his department and 84 that came from the university itself.

He then estimated that each email took him 30 seconds to read and worked out the average salary of doctors at his institution he determined that the cost of email overload equated to $1,641 per doctor for the year. The institution has more than 629 doctors on its staff meaning that more than $1 million was spent on lost time.

How to estimate what emails are costing you

Add up the number of emails that are received across your organization every day. Factor in the most conservative estimate of 60 seconds lost to read each email and multiply it by the average salary. This will give you a conservative idea of what the problem is actually costing you. 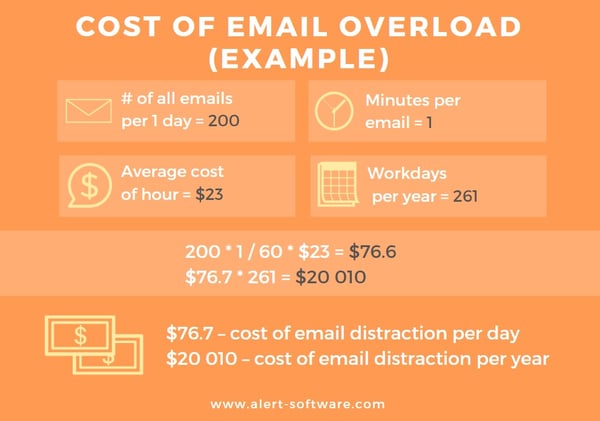 2. How much money are you losing to time-consuming meetings?

Meetings are an often unavoidable fact of life in the business world.   Meetings are a divisive topic… people either love them or loathe them. Those who loathe them resent them for wasting time that could be spent doing other things.

According to Atlassian, the average office worker attends 62 meetings at work every single month… and around 31 hours are spent in meetings that were unproductive.

In the survey, 47% of respondents said they felt meetings were the number one waste of time in their office… and 90% of people admitted that they spend time in meetings daydreaming, while  73% said they did other work while they were in a meeting.

The meeting itself isn’t the only time that is lost… a Clarizen/Harris Interactive Study found that  67% of people spend up to 4 hours every week preparing for the meetings that they are going to attend.

Like emails, there is a cost to the time spent on these meetings. Atlassian’s study estimated that in the United States alone, unnecessary meetings cost $37 billion in terms of salaries every single year.

How to estimate what unproductive meetings are costing you 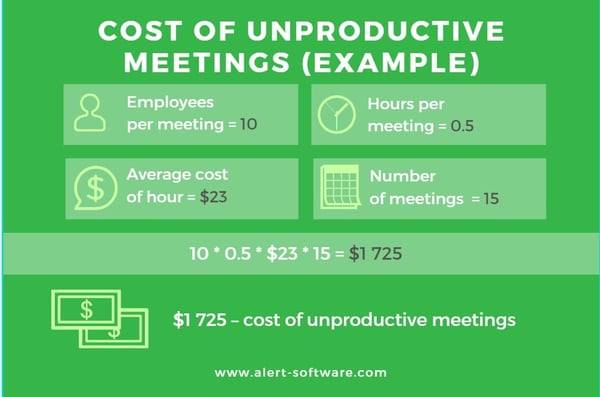 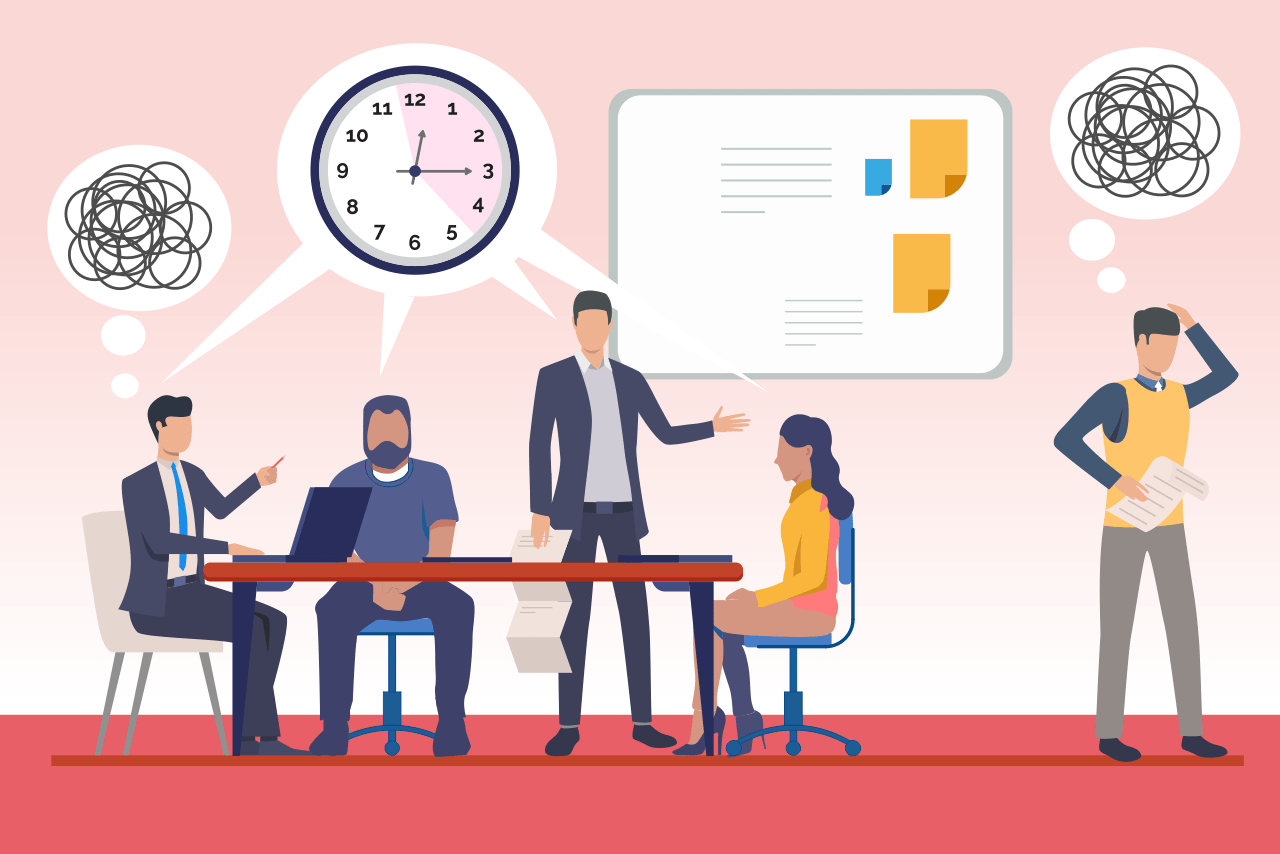 3. Staff turnover and absenteeism as a result of poor internal communications

Engaged employees feel positive about their workplaces and feel included and valued and are more likely to be productive.

When employees are disengaged they don’t focus on their work properly, they don’t care about business outcomes, they are more likely to be absent on any given day (or even present, but “checked out” mentally), and ultimately they start to look for a better place to work.

There are many contributing factors to successful employee engagement, and internal communication is one of them.  When you want people to feel included, you need to tell them things and not expect them to operate in the dark.

While internal communication is just one factor in engagement and improving employee engagement should be a holistic endeavor, there are still costs to be borne when you don’t get this right.

How to estimate what this is costing you

Unless employees are truthful in the exit interview process, you may not be able to tell how many left because of poor internal communications.  But if you have a high staff turnover rate it is generally safe to assume there is a problem with the culture in your organization, which includes your internal communications. Calculate the total number of employees you have at the beginning of the year then subtract the number that has left to get a percentage out of 100.

How many new hires have you needed to take on to replace the employees who have left? Add up the associated cost of replacing these employees.  A lot of new hires fail within the first 90 days so you may need to go through the recruitment process multiple times because one employee has left.

Look at trends in your absenteeism rates. Is it increasing? How many hours are lost to absenteeism each year? What is that cost in salary?

How does your organization compare to the rest of your industry? For example, according to the National Healthcare Retention and RN Staffing Report, the average hospital’s staff turnover rate is 18.2%.  The Banking and Finance industry has a similarly high turnover rate – 18.6% – according to a Compdata survey. These two industries are high compared to other sectors. Are  you faring better or worse? 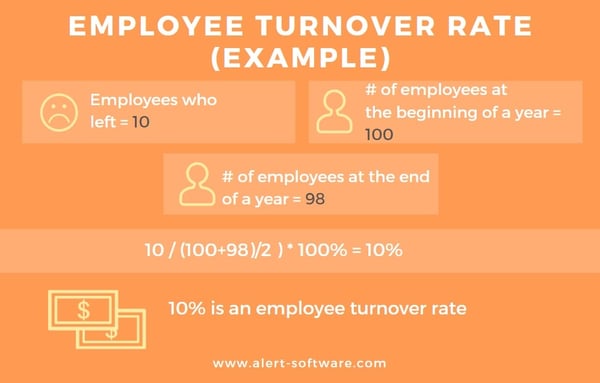 Ineffective or non-existent communication within an organization can affect the organization’s reputation with external stakeholders including customers, investors and other partners.

For example, it can lead to miscommunication with customers about what they can expect. It can also affect outcomes such as successful project delivery.

A recent study by the Project Management Institute found ineffective communications had a negative impact on the successful execution of a project and in one third of the time it was the primary factor in a project’s failure.

In some cases communication can be a matter of life and death.

The US Joint Commission for Hospital Accreditation reports that the in more than 70% of cases, the primary cause of inadvertent patient harm was a result of communication failure. Sadly, approximately 75% of these patients died as a result.

How to estimate what it is costing you

Do you have errors that were made? What will it cost you to fix?

Have you had legal problems as a result of poor communication? What is the cost of the legal bills and anything you’ve had to pay to another party as a result of litigation?

Have you suffered reputational damage? Are your sales down? By how much?

Responding in a timely manner when there is an emergency or crisis can affect your business in many ways. From being able to ensure the safety of your most important resource – your employees – through to how well your business recovers in the aftermath of a disaster, communicating quickly and efficiently is key.

Having robust systems and processes in place to communicate in an emergency can help save lives, help to protect your company’s assets and help to maintain your reputation afterwards.

The quicker you respond during an emergency, the better the outcome for everyone… including your bottom line. For example, in a hospital, if there is a disaster, productivity doesn’t need to be sacrificed if you already have plans in place for capacity management. Or in a sales environment where you have mitigation strategies for the telephone system being down.

How to estimate what it is costing you

Determine how much time has been lost to the crisis that has befallen your organization. Multiply that time by the cost of wages.

Add in any other losses – such as infrastructure, estimated loss of sales. What is covered by insurance? What isn’t?

You may also have legal costs and ongoing reputational damage. 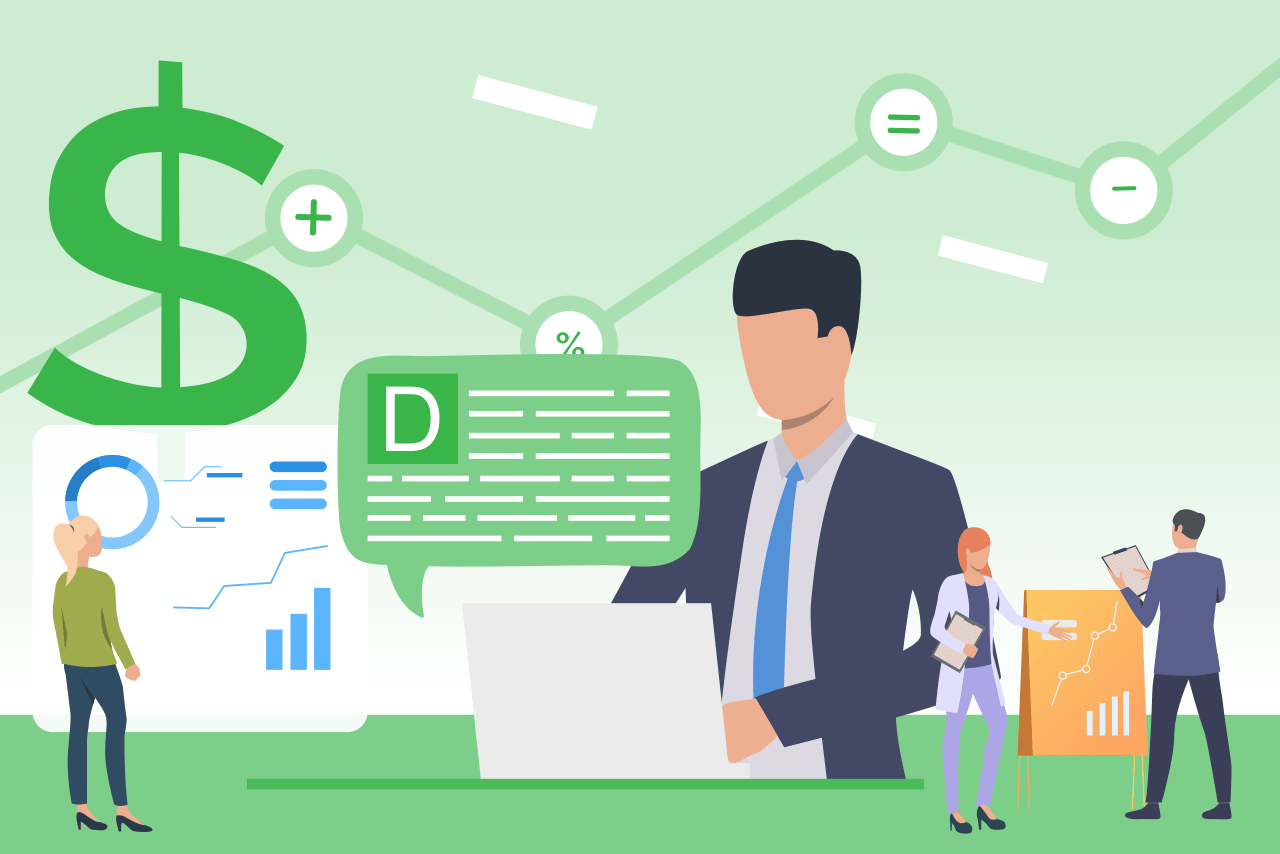 Fight internal communications failures and inefficiencies in your organization with the DeskAlerts platform – a multifunctional software system that helps you to overcome email overload and fatigue by sending pop-up notifications straight to employee desktops, reducing the number of messages in their inboxes.

DeskAlerts will help you to save money by making your internal communications processes more efficient.

Pop-ups can be sent for more urgent communications, but other features such as  a scrolling ticker-tape news feed and screensavers can be used to deliver important information that isn’t so urgent.