Every passing year, it appears that the world we live in becomes more dangerous and disaster-prone. Stories of strong storms and deadly earthquakes seem to hug the headlines on a consistent basis. And it’s not a matter of perception either. In fact, the World Meteorological Organization says that Earth is almost five times more disaster prone as it was in the 1970s due to climate change. Citing figures, the WMO says that the first decade of the 21st century has nearly 3,500 natural disasters caused by floods, storms, and droughts compared to just 743 catastrophes during the Seventies.

The bottom line is that we’re living in a world where emergencies brought about by natural disasters will become almost commonplace. This further underscores the need for disaster preparedness. In the workplace, having a system to communicate emergency alerts is very critical for any company. From saving the lives of employees to ensuring that operations won’t be hampered, there are many benefits of having an emergency alerts system. 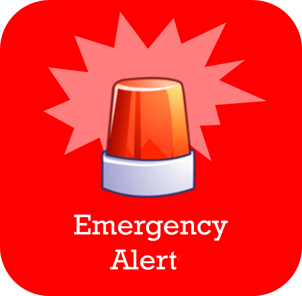 But when in looking for a way to reach employees and even clients during an emergency situation, what is the best, most effective method? Is it through SMS? Is push notifications good enough? Should you still use the traditional phone call? Or is it a combination of all methods?

SMS is often thought as the best way to inform employees about an emergency. After all, almost everyone has a mobile phone. Moreover, it is possible to send one message to multiple recipients. And unlike email and push notifications, there is no need to be connected to the Internet in order to receive emergency alerts. Employees may be out in the field, or on their way to the office, and they’d still receive the alerts anyway.

However, many safety experts dispute the notion that SMS is the best method for sending emergency notifications. In 2008, a research report published by 3G Americas focused on the limitations of text based emergency alerts. It noted that SMS isn’t the most reliable because cellular networks can get clogged during emergencies due to the volume of text messages sent. Moreover, it added that it can be difficult to target users in a specific location, and that message delivery isn’t predictable with SMS.

With the growing number of smartphone users, many firms realize that they can use push notifications in alerting employees about emergencies. Unlike text messages, it is easier to target users in a specific location with push notifications. Plus, receipt and delivery of message can be confirmed. And push notification alerts are seen right away by the recipient.

However, unlike text messages, Internet connectivity is needed for push notifications to be received. Thus push notification can be ineffective for employees who don’t have access to the Internet.

With the popularity of Twitter and Facebook, and the fact that anyone with a smartphone can log on to their social media accounts anytime and anywhere, it’s not surprising that companies have also explored the possibility of using social media for sending emergency alerts.

But like push notifications, the problem with social media is that one needs to have reliable Internet connection to receive emergency alerts. So if an employee is in a rural area, the chances of receiving an emergency alert thru Facebook or Twitter are really low.

As you can see, there’s no such thing as the perfect vehicle for sending emergency notifications. Each communication channel will have its pros and cons. This is why many firms opt for a multi-channel emergency notification system to be able to reach out to their employees before they get into any sort of trouble during a natural or man-made disaster.