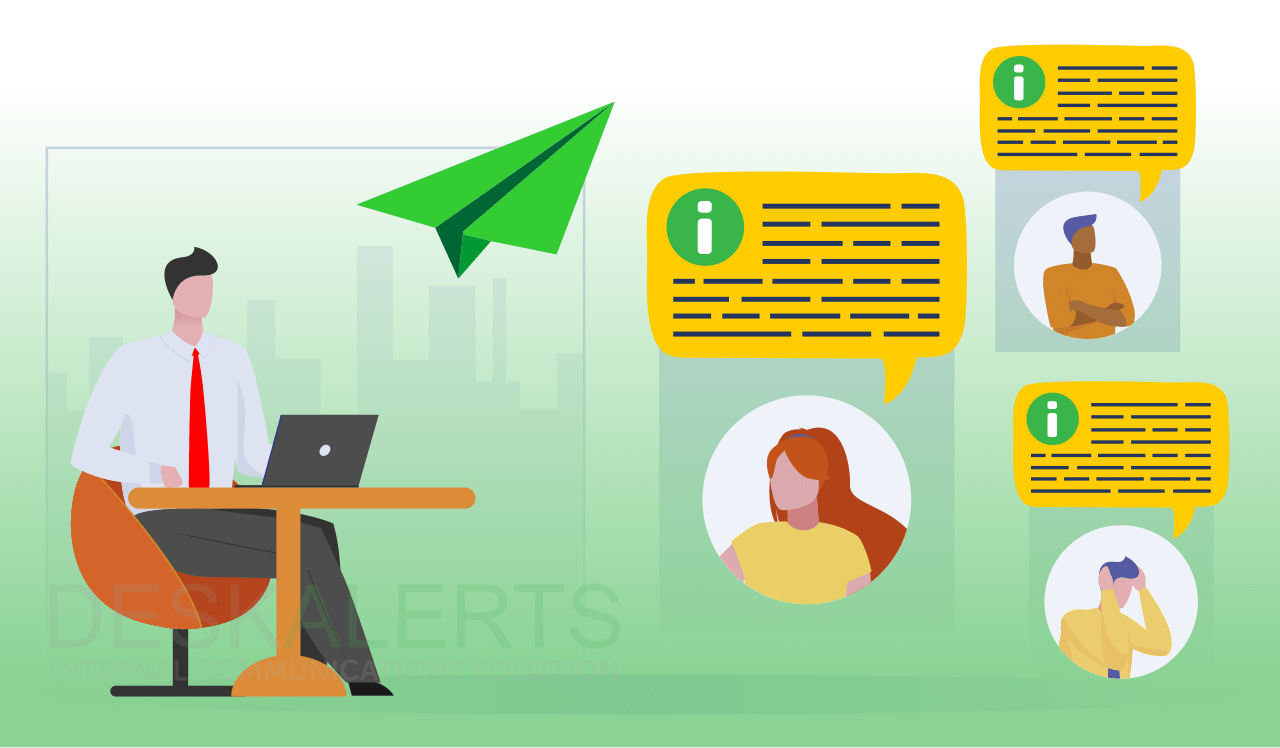 When it comes to communicating and engaging with employees, the words that they read can seem inauthentic and hollow if they aren’t matched with consistent actions displayed by those who are delivering them. There’s a saying that “actions speak louder than words” and this is especially true in the  internal communications space that is often used to set cultural standards within organizations.

While many internal communicators believe in the doctrine that “content is king”, the actions of leadership are even more important, according to Per Zetterquist, Senior Advisor Agerus. Leadership and Communication Expert, Coach and Mentor.

Although key messages are important, internal communications professionals often lose sight of the importance of actions - or “walking the walk as well as talking the talk” - when they’re simply focussed on getting the words right.

“Because actions speak louder than words. And yet we continue to obsess over our texts, chop and change our manuscripts, and adjust the smallest details in our power-point slides,” Per says.

Internal communications professionals are in a unique position to be able to work closely with the leadership teams of their organizations to influence meaningful behavioral change. 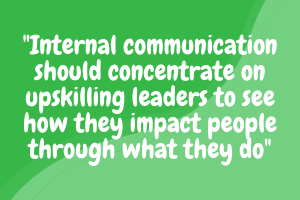 “The number-one thing for internal communicators to focus on is helping leaders to become truly genuine in their communication with their organization,” Per says.” And what communicates more powerfully and genuinely than our actions? “

“This means that internal communication should concentrate on upskilling leaders to see and understand how they impact people through what they do – and sometimes even more importantly, what they don’t do!” he says

“In practice, this relies on supporting them to think through what the new business strategy, or new set of values means in terms of actions for the new ways of working so that people see, experience and understand the changes that the leadership team want to flourish,” Per says.

The importance of being genuine with messaging

Involving leadership from the beginning is key to having messaging that is genuine and having them display actions that are consistent with words.

“With this said, it makes me wonder why so much time is spent crafting messages, designing PowerPoints and rehearsing communication with senior leaders, only to then leave it up to them to translate everything they say to the bottom line into the actions they take every day (or indeed, don’t take).” Per says. 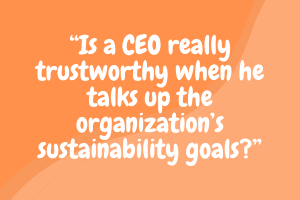 “Is a CEO really trustworthy when he talks up the organization’s sustainability goals, and then leaves at the end of the day in the corporate jet?” Per asks.

“And equally, is the board authentic and genuine if they promote social responsibility to external stakeholders when the company only pays its people the minimum wage?”

He advises that communications professionals who spend their lives  advising senior leaders ought to think less about how their messages look and sound. Rather, they need to think much more about how their day-to-day behaviors are interpreted internally and externally.

How IKEA mirrors its words with its actions

According to Per, "IKEA is a role model in this. They talk sustainability. And they act as a leader in the field. In 2020 they have committed to take all the non-recyclable out of their stores and restaurants. They have a goal to make all their stores run on renewable energy and will by 2025 have all home deliveries to consumers provided by electrical vehicles. On top of that they have set a goal to offer customers affordably priced solar panels. 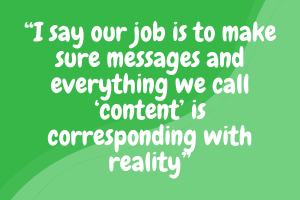 All this is to me powerful communication where you show your commitment by action. No need to read their yearly sustainability report to be convinced about their commitment if you had the new kitchen table delivered by an electric truck and cook the meals on a stove powered by the IKEA-solar panels that you could install yourself and pay for without talking to the bank?

Employees too are of course included the sustainability strategy. IKEA commits to grow and develop in an inclusive way, respecting and encouraging diversity and promoting decent and meaningful work across the IKEA value chain, enabling people to provide a good life for themselves and their families.

Inspired by IKEA and other progressive businesses I say our job is to make sure messages and everything we call ‘content’ is corresponding with reality". 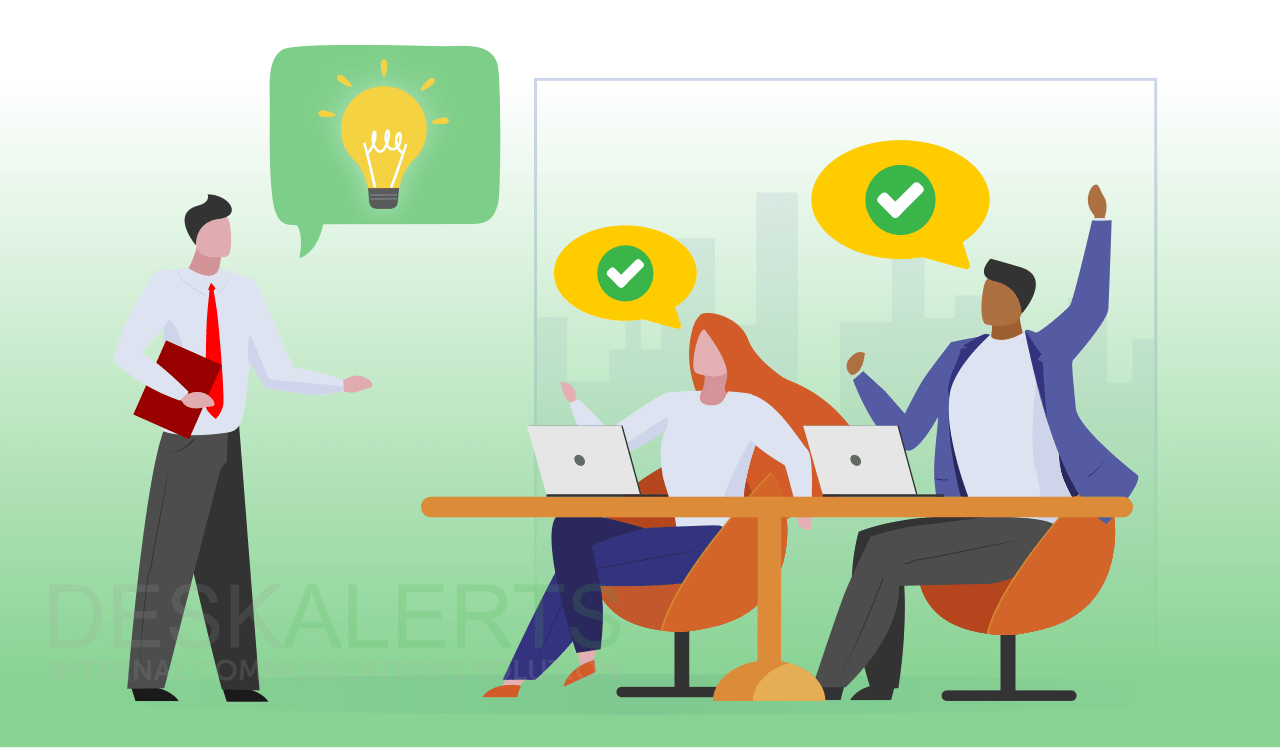 So how do communications professionals overcome this challenge and ensure the actions of their companies’ leadership match the words that they are speaking or writing?

According to Per, taking this on as a professional mission will not always be an easy task.

“It will, for sure, be challenging, and I imagine it will thrust us way outside our comfort zones where they have often been left alone to perfect a CEO-letter or design a compelling PowerPoint presentation,” Per says.

“At the same time it will enable us to become truly influential as advisors since we will provide the key to other people’s behaviors and actions,” he says.

“So my advice is to think less of intranets, townhall meetings, and Q&A sheets. Instead, consider the behaviors that would be appropriate for senior leaders to role-model in order to set a positive example for the bottom line, and teach them how to embody them in their day-to-day activities,” Per says.

“Senior leaders who are aware of their influence on others should first ask internal comms professionals for advice on how to conduct themselves, and then what to communicate in order to encourage behaviour and attitude change in their employees,” Per says.

Getting back to basics with communication

Internal communications as a function has changed a lot over the past decade or so. Traditionally it was very straightforward in terms of developing and delivering key messages, however rapid advances in technology have shifted the focus to producing content for a variety of channels.

Per says that in recent years, communication as a profession has at large been backing off from many of these critical comms aspects, focusing its talent and time on various channel-related matters connected to the growth and advancement in technology.

“To my mind it casts the profession back to the time when communication was about defining a sender and making sure they had a well-crafted message to transmit to an audience,” Per says. 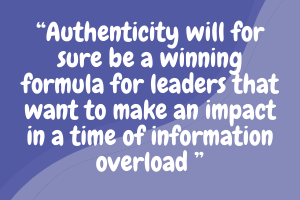 “In the early days this was enough to make a communication function look useful. But if anything, things have got worse in the last couple of years because of the explosion in channels through which we want our leaders to be visible,” he says.

“We can distribute visuals and messages in every fashion and format nowadays, to a global workforce".

“All this new technology and on-line communication is exciting, but I believe we need to take top executives out of the channels and make sure they become genuine and authentic to people in real life, building a presence in the organization based on the power of positive and inspiring behavior,” he says.

Harnessing a “getting back to basics” approach is key to this, according to Per. “Instead of giving them a pack of PowerPoint decks through which to share information with employees, we need to make sure they have sincere conversations with employees in order to demonstrate their actions and behaviours up-close for people to model in themselves, he says.

Per cautions that people respond better to genuine efforts and actions than they do to contrived platitudes.

“Authenticity will for sure be a winning formula for leaders that want to make an impact in a time of information overload and battle for people’s attention,” Persays.