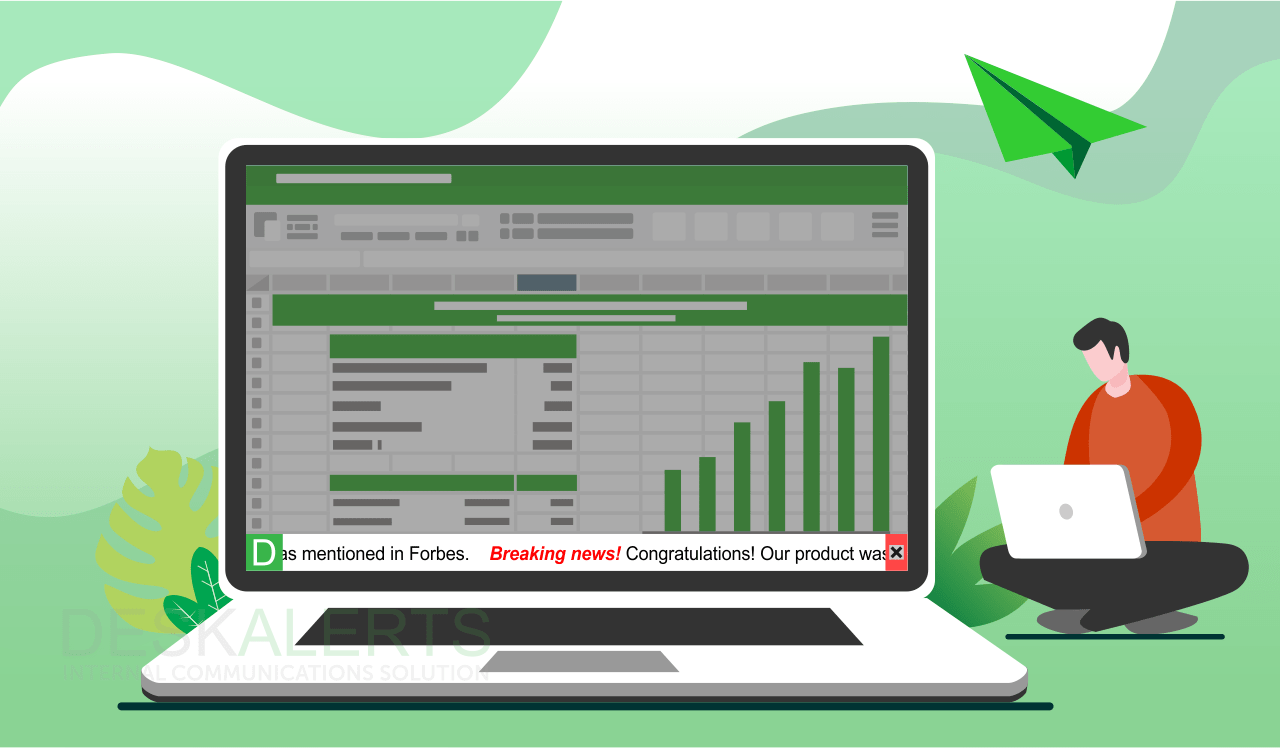 Whenever you watch a news channel or program on television, it's more than likely you’ll see a scrolling band of text along the bottom of the screen, broadcasting different headlines and other information while you watch the program. This is called a computer ticker tape and is an eye-catching and effective way to share information.

The same principle can be deployed as a corporate communications tool to keep employees informed on a range of information. As one of the features of DeskAlerts, a desktop ticker tape can appear as a band of text along with your staff members’ computer screens, keeping them up-to-date with a range of developments within your organization while they work.

The computer ticker tape software is customizable and you can make it easy to use on the back end send content to it via an RSS feed.  Content can be sent to the entire organization, or to specific audiences that you define using Active Directory.  Content can also be scheduled in advance to send at a time you’d like it to be seen, and how often you would like it to be seen.

Hyperlinks can be included in the scrolling headlines, enabling your employees to click through and find out further information on your company intranet or internet sites, or anywhere else you’d like to link them to.

How to use ticker tape software

Mike is from a marketing department in a company that produces consumer goods, with more than 3000 employees.  He needed to find the right tool to keep the organization updated with a range of marketing metrics, for example, sales figures, website statistics and information about things like new product launches.

“We needed to keep the team informed about real-time marketing metrics,” Mike said.

“We were looking for an internal communication tool to keep our teams informed about the sorts of metrics that are frequently updated and change a lot, as well as product announcements,” he said.

Management in Mike’s company asked if there was a tool like a ticker tape software for PC  that could be placed on employees’ screens to show metrics and numbers, as well as having statistics available to tell who had read the information.

“We needed real-time information to be shown in the ticker. We didn’t have this option previously, we had metrics but no way of delivering them in real time,” he said.

How to use the DeskAlerts desktop ticker to deliver internal marketing communication to employees instantly, with these features:

The benefits of using computer ticker tape in internal marketing communications include improved knowledge and information sharing across your team – everyone knows what the current status is and doesn’t have to work hard to find the information.

Email is a problematic issue in many companies, with employees struggling with overloaded inboxes and more emails than they have time to open.

This was a problem faced by Evan from the communications department of a healthcare provider with more than 1500 employees.

He has a diverse workforce he needs to keep informed on a range of issues, from company news to important announcements, the latest industry trends, best practices and employee achievements.

The volume of information Evan needs to send means he was sending a newsletter twice a week. Employees in his company include doctors, nurses and other medical staff, as well as administrative employees. They work shifts around the clock and aren’t always “in the office” during traditional working hours.

“Due to the sheer volume of emails being received within the organization, we found that our staff was lacking a clear oversight of their workload. Important information was easy for them to miss, and they were spending unnecessary amounts of time slogging through their inboxes looking for emails to find the information they required,” Evan said.

“Emails could sit in inboxes, unseen for hours.  Both because of the volume being received and employees starting shifts later in the day meaning important information sent in the morning would be pushed down their inboxes by the time they arrived at work. So there was potential for customer support to be negatively impacted,” he said.

The DeskAlerts ticker software for Windows  and Mac can be used to replace emails by:

The benefits of using computer ticker tape to replace emails are that people can reclaim their inboxes, information is immediately seen and not lost, internal communication is improved and there is less likelihood of mistakes being made because of missed instructions or guidance.

IT outages are a headache for employees and IT departments alike: we all rely on IT software and hardware to do our jobs.

Sarah, an IT specialist in a pharmaceutical company with around 2000 employees, found that every time there was an outage it put a lot of pressure on the IT team.

“Each time there was a planned or unplanned IT outage, hundreds of people from across the company would get on the phone and call the IT team,” Sarah said.

“People also forget about things like system updates and directives to leave their computers on at the end of the day for updates to take place and would switch their PCs off and go home.  When you need to get people to restart their PCs you need to literally call every single one of them,” she said.

“This takes up a lot of the IT team’s time and means a lot of pressure to try and get everything done in the timeframes we need.   The desktop ticker lets us immediately notify the affected groups of users, letting them know what’s going on and keeping them updated on the progress of the situation while we’re fixing it.” 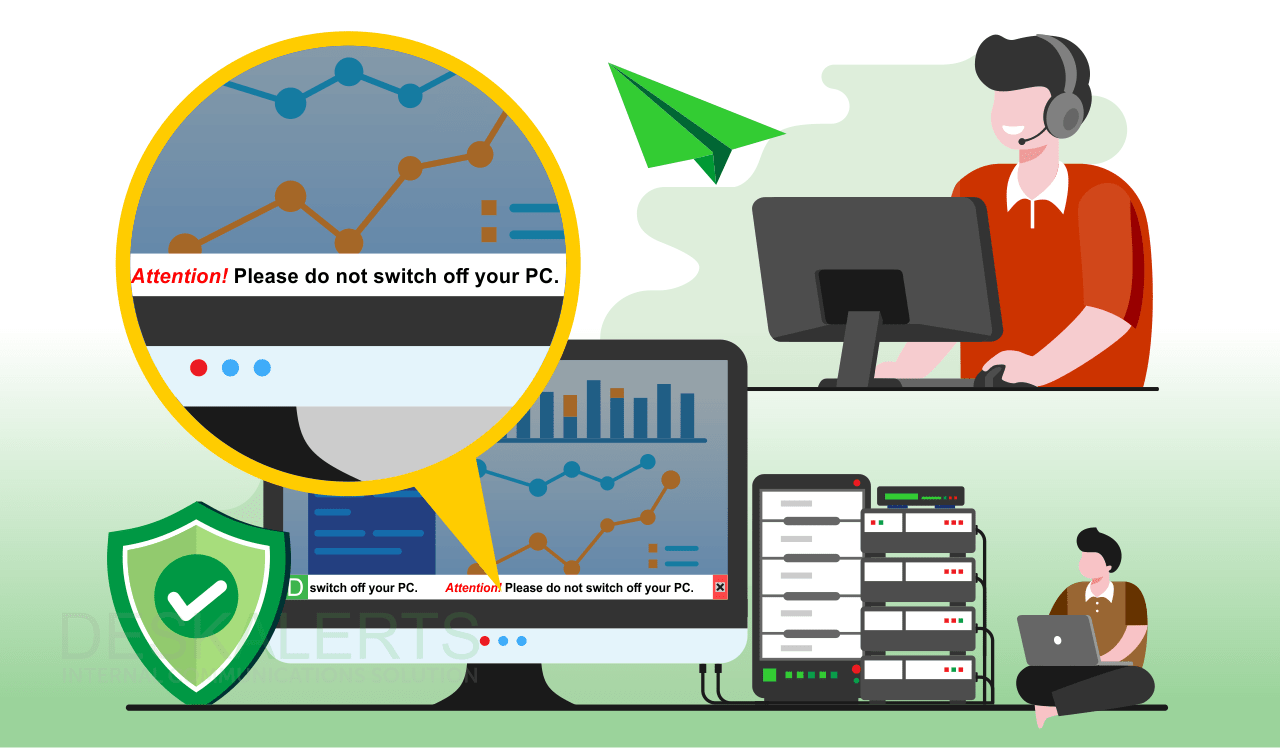 The DeskAlerts desktop news ticker can be used to inform employees about outages by:

The benefits of using ticker-tape software during IT maintenance or outages are that it takes the pressure off the IT team so they spend less time responding to calls and emails asking the same information over and over again, and can get on with the task of upgrading the systems or solving the issue that’s caused an outage.

Besides, desktop tickers occupy only 4% of the screen - they just cannot annoy your targeted audience.

There is a range of benefits of using computer ticker tape as a dedicated internal communication channel in your organization:

You can use ticker software for Windows and macOS.