Gone are the days when companies display posters or bulletin boards in their client waiting rooms and office common areas to keep people occupied on their down time.

In today's post-modern world, digital signage screens steal the gaze of clients who came in too early for a meeting, customers standing in line, and employees waiting for colleagues in the lobby. Clearly, using technological advancements in communication is an unstoppable trend, and companies have no choice but to keep up, if they do not want to be obsolete and irrelevant. 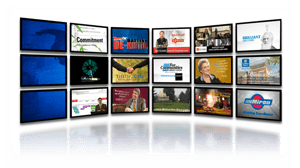 The Gadget Era and The Challenges That it Poses to Communicators

Most people today usually use at least one gadget every day. It is very common to see people using their phones, computer tablets, laptops, e-book readers, or mobile gaming consoles in public places.

In 2013, it has been reported that mobile devices in seven countries outnumber people. According to the Organization for Economic Cooperation and Development, these countries are Finland, Australia, Japan, Sweden, Denmark, South Korea and the U.S..

“That means there was more than one wireless broadband subscription per person, usually because consumers have more than one mobile device that can go online,” Stephen Lawson of PC World wrote. “The U.S. just barely crossed the bar, while Finland led the group with more than 123 percent penetration.”

With these thoughts in mind, it is naturally more challenging than ever for communicators to reach out to their audiences as they try to compete with gadgets. And more often than not, instead of competing with gadgets, communicators send their messages through them.

Today's messages also need to be a lot shorter and visually appealing to catch the attention of its intended audience.

Digital signage screens may just be the perfect tool for communicators to up their chances of getting their messages across, and can be utilized for both internal and external corporate communication. Creative, colorful, and moving announcements and information presentations have bigger chances of being absorbed by its audience – may they be clients or employees.

With at least one mobile device ready to be used anytime, a message should be catchy enough to engage the audience member before he or she decides to put out a personally-owned gadget and use it for entertainment during down time.

With its many facets and capabilities, digital signage screens have what it takes to compete with gadgets used to go online.

There are various benefits to using digital signage screens to reach out to the target market. Here are some of these advantages:

Digital signages keep the audience engaged with automatic slideshows. When audience members read magazines, newsletters, or other printed materials, they have the power to turn the pages and just focus on what they want to read. One of the benefits to digital signages is that each presentation slide is timed, allowing the program to automatically “turn the page,” so to speak. Because each slide is timed, audience members are led to absorb each one before going to the next. The downside to this? If the audience is bored with a slide, he or she may choose to ditch the presentation all together. In the end, it all depends on the quality and creativity of the presentation.

A wider scope of materials to be displayed. Unlike traditional bulletin boards, digital screens have the capacity to display a wider array of materials, such as photos and videos.

Less waste, and more environment-friendly. A digital screen only needs a soft copy of the presentation to play it over and over again, minimizing paper waste as with posters, flyers and traditional newsletters.