The DeskAlerts Network Messaging Software provides the perfect solution for companies operating in the financial and investment arenas. 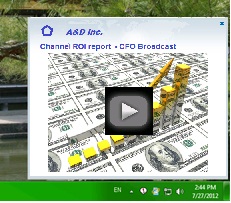 The Application of DeskAlerts Network Messaging in the Investment World

DeskAlerts network messaging is the only type of desk alert solution that is effective in geographically and technologically diverse networks, including the financial world and investment markets. DeskAlerts’ network messaging system can send alerts across:

Additionally, alerts can also be sent to Citrix clients and terminal servers, any e-mail address and numerous mobile devices. Most importantly, DeskAlerts network messaging is an unobtrusive application that is simple to install, as well as being a completely web-based solution, with centralized data storage and internal hosting at the corporate level.

The Communication Infrastructure of the Financial Industry

Any literature about software architecture today probably contains content regarding the different types of communication applications that are all available on the market, especially if it relates to network messaging. With the advent of the internet and the World Wide Web, communication, and network messaging, has affected the competition, and efficiency, of the global investment arena. Whether that impact is negative or positive depends on the type of network messaging system being utilized.

Taking into consideration that there is so much at stake in the financial and investment industry, the creation of messaging standards has become a critical facet of this segment of global society. Although these standards are developed on a voluntary basis, it is rarely achieved without corporate agenda influence and individual egos. Newer application paradigms and consumer technologies are driving messaging standards and:

Since DeskAlerts network messaging has become one of the most fundamental and preferred features of the communication industry and its architecture, the making of poor choices will eventually going to have a disastrous effect on communication throughout the financial and investment industry. These aspects include the effect on availability, performance and scalability. The combination of these will negatively affect user acceptance of these systems. Not to mention the impact it could have on the financials.

What Exactly is a Messaging Standard?

The terminology “messaging standard” is a combination of terms with different meanings. Unfortunately, there are a number of definitions for both terms that are as different as the individuals who are defining these two terms. A “message” is an informational unit that has to be moved or transmitted. “Standard” is a term that refers to a basis for comparison and could be those of a de facto, international, or proprietary nature. True standards are typically defined or described by an international body.

To continue, in 1992 the FIX protocol was born as a framework of bilateral communications and network messaging. This framework was initially utilized between Salomon Brothers and Fidelity Investments during equity trading. It has since become more of a de facto network messaging standard in the different equity markets where trading and pre-trading communications are concerned.

Those network messaging standards that have the greatest chance of survivability will exhibit the following common features:

Additionally, one of the key factors that can greatly affect network messaging standards involves the selection and use of a messaging interface. This will have an effect on the cost, scalability and usability of the network messaging format which can ultimately affect the way in which individuals in the financial and investment arena communicate. Ultimately, this could indirectly affect a number of different aspects of investing and trading.

The Future of Network Messaging in the Global Investment Market

The financial industry and investment markets have witnessed an exponential growth in the number of new network messaging systems that have been launched. These have largely been driven by the:

In addition to the above, instant and real-time network messaging between a majority of individuals and everything else in general has become extremely pervasive, especially where the battle between better resource and richer user experiences are concerned.