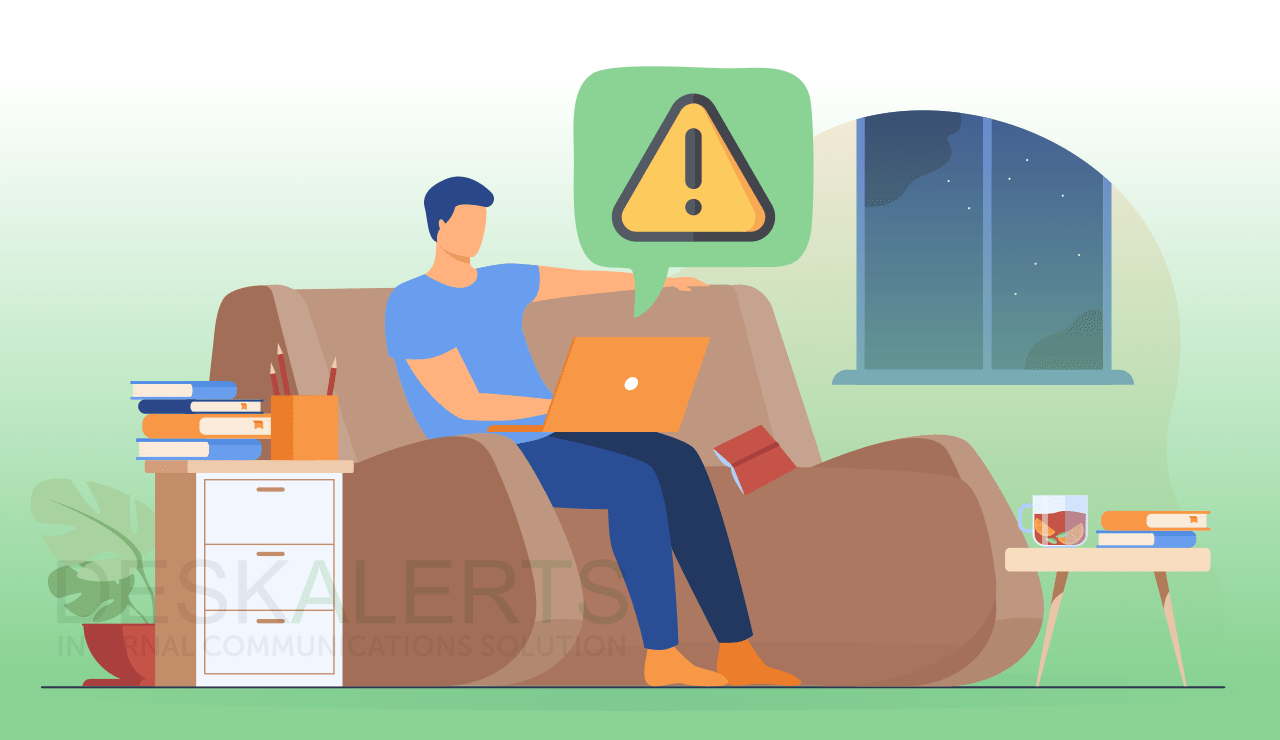 Schools and other educational institutions have had to shift to new learning models during the COVID-19 pandemic, which has often meant students learning from home on a scale never experienced before.

It’s estimated that hundreds of millions of students worldwide no longer attend physical classes where they normally would.

For students to participate in online education, they’ve needed access to devices such as laptops and tablets so that they can do their lessons via video calls and other online collaboration tools from the safety of their own homes.

But the transition to online education has been a bumpy one for many families, particularly those who don’t have home computers and can’t afford to purchase devices so that their children can participate in their lessons remotely. It is especially difficult for families who have lost jobs and income as a result of the pandemic.

For example, in the United Kingdom, where some schools have around 60 to 70 % of children without laptops, the Department of Education announced that disadvantaged students would be given access to free computers.

In the USA, a similar policy has been in place across many school districts.

Unfortunately, access to laptops, even with these policies in place, has still been problematic.

The Chicago Tribune reports that the world is experiencing a 41% higher demand for low-cost laptops compared to the same time last year.

According to the publication Education Week there have also been major supply chain shortages - partly driven by demand as well as trade sanctions imposed on China by the US Federal Government - that have meant many school districts don’t have extra laptops to loan out, with extended delays in acquiring more devices.

>> 5 templates to use if there’s an emergency at your school. Free download <<

One way educators can distribute laptops to those most in need is to recall computers from students who don’t actually need them.

For example, in the Denver school district, school leaders have encouraged families to return any devices issued by schools if they have adequate personal devices they could use for remote learning instead.

But some people forget to or don’t want to return laptops when they no longer need them.

In Brevard County in Florida, at the end of the school year, 2,600 laptops worth around $1.3 million hadn’t been returned after home learning.

Officials were looking at ways to try to recover them.

In some cases, students weren’t living with their usual caregivers, making it harder for administrators to contact the right people to return the equipment.

This scenario is undoubtedly being repeated worldwide and is a logistical headache for administrators to deal with on top of all the other burdens and practicalities around remote learning. The bottom line is that these assets cost money to replace - money that school districts, notorious or being financially squeezed and cash-strapped, often don’t have.

How DeskAlerts can help you get laptops returned

One solution is to include software on laptops and other devices that will send reminders to return them to the school. This means that the device itself is used as the contact method and doesn’t solely rely on administrators having up-to-date contacts for a student’s caregivers. 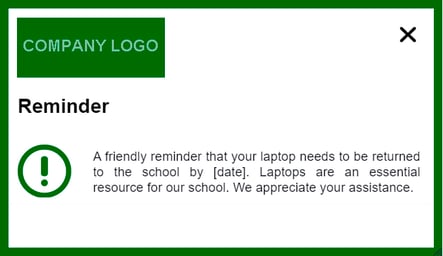 Such messages can be scheduled in advance to coincide with any loan period. For example, if they are loaned for a few weeks at a time, or towards the end of term or the school year.

DeskAlerts is an internal communications system that works by sending notifications straight to devices. It is available for both desktop and laptop computers, for Windows and Mac, and as an app for phones and tablets for iOS and Android devices.

Notifications can come in the form of intrusive pop-up alerts that take up space on the user’s screen. They are eye-catching and hard to miss.

You can send messages to every computer in your network, or just to specific groups of people - or even individual computers. Notifications can be scheduled in advance to appear at a specific date and time or can be sent out as needed to appear instantly. 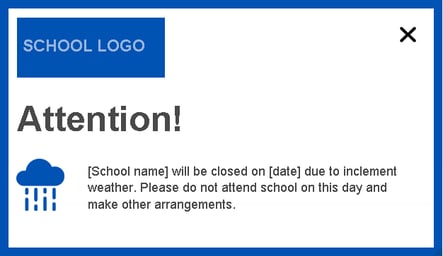 One feature that is hard to ignore is the “lock screen” alert, where the user’s entire screen is taken over by a message of your choosing. This feature would be useful to get the attention of anyone who still hasn’t returned their laptops after several repeated reminders.

To make it even easier for you, we’ve included some short examples of texts that you can send via a pop-up alert to your students and teachers.

A solution to improve communication in your school 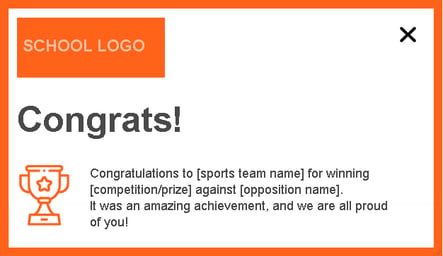 Of course, getting people to return laptops isn’t the only use for DeskAlerts. Investing in DeskAlerts will help you improve and streamline internal communication on your campus (or virtual campus during COVID-19!)

We have clients in schools and universities who regularly use the suite of DeskAlerts tools and functions to let faculty and students know about important information.

COVID-19 has presented lots of challenges that schools didn’t expect to be facing just 12 months ago and calls for innovation to tackle new problems. Overhauling your communications system will reap benefits not only during the pandemic but well into the future.