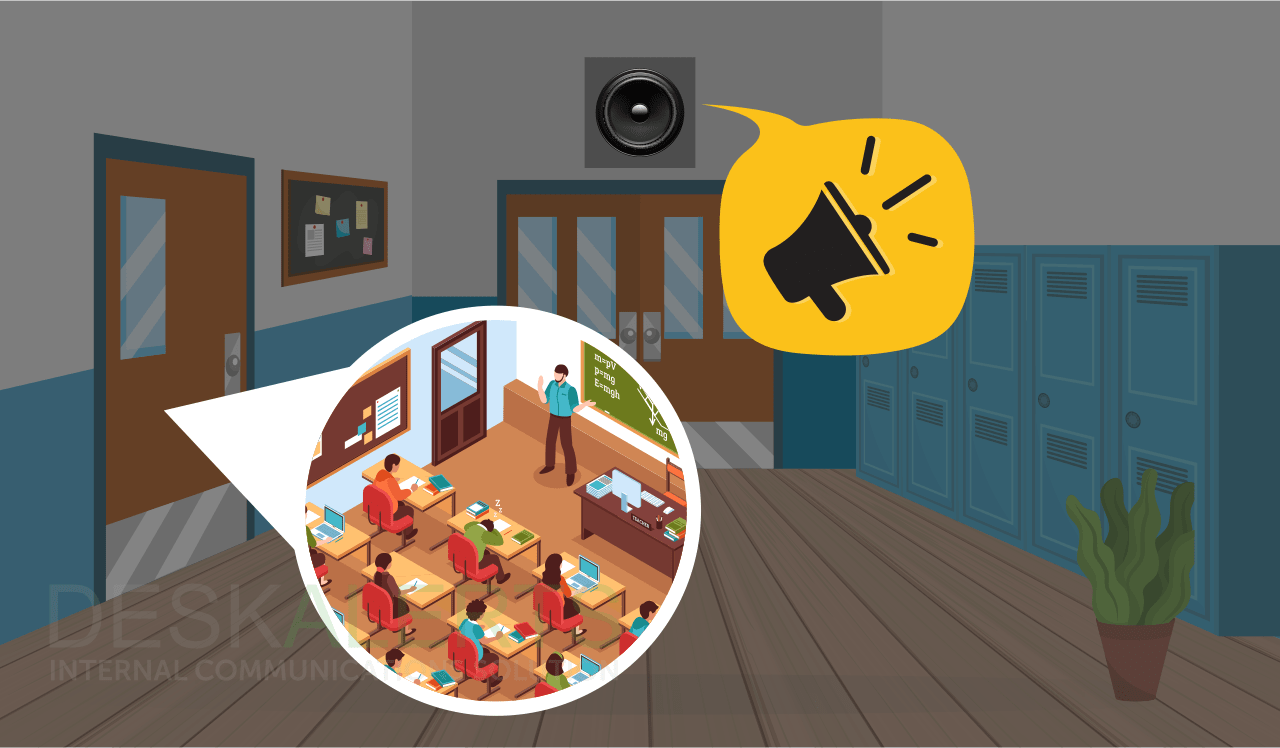 Keeping students and staff safe during an emergency is a priority for administrators in schools, colleges and universities around the world.An emergency situation can take place with little or no warning, and unless there are adequate and effective systems in place to alert students and faculty members, lives can be lost or people could be seriously injured.

A 2018 study by the US Centers for Disease Control and Prevenmass notification system for schoolstion (CDC) found that many public school districts in the USA don’t have appropriate plans in place to respond to  natural disasters, outbreaks of infectious disease and other emergencies. This is despite a federal directive in place for all schools to address these needs before 2020.

In an emergency every second counts. Fires move quickly. Active shooter incidents can unfold in just minutes. An earthquake can turn buildings to rubble in seconds. The longer it takes to let people know, the worse the outcome could potentially be.  Schools can have hundreds, sometimes thousands of students, making the task of reaching them all even more complicated.

By investing in an emergency notification system for schools you can reach people quickly across different devices, using a range of communication channels.

Nominated members of staff, such as management, administration, human resources, communications, IT or facilities personnel have access to the system to send emergency communications messages to students and staff.

There are lots of different emergency alert systems on the market. In general they will send messages to computers, phones, tablets and other screens about the situation and provide instructions on what steps people need to take to be safe, for example they must evacuate or they must seek shelter immediately.

Some mass notification systems for schools will dial numbers, leave voice mail messages and also alert authorities such as police, fire or ambulance to an emergency situation.

The range of potential emergency situations schools can face is large: from natural disasters like hurricanes, tornados and earthquakes to fires, gas leaks, active shooters and other violent outbreaks… having the ability to react quickly and provide advice on what steps need to be taken can help to prevent or reduce casualties.  These are some of the reasons you should consider mass notification systems for schools on your campus:

Unfortunately, there have been a number of school shootings in recent years and these incidents seem to increase. Most active shooter events are over in less than 10 minutes, and around half are over before first responders arrive with help.  The quicker you can let people know via a school notification system that such a situation is unfolding, the quicker they can take action and keep safe.

Fires can spread quickly and without an orderly response, people can panic and cause even more problems.  When a fire breaks out you need to be able to quickly let people know in the affected area so they can evacuate to a safe area.

There are a number of different hazardous substances on school campuses that could cause harm to staff and students. This can include chemicals in science and other technical facilities, or gas that can be used throughout the campus. When gas and chemicals leak the situation can escalate quickly and become lethal – from the potential for explosions through to the risks caused by inhalation of or exposure to the substance.

A wide range of natural disasters can strike at any time including earthquakes, forest fires, tornados, hurricanes and floods. When your school finds itself impacted by a natural disaster you need to quickly alert your students and staff with the appropriate steps to take. For example, they may need to evacuate if there is a forest fire approaching, or shelter in place if it is too late to leave.

Severe weather events can turn deadly quickly. People can be killed by falling trees in open areas, damaging winds can blow heavy objects away and torrential rain can turn to flash flooding.  When there’s a severe weather event, mass notification systems for schools alert everyone on campus so they can be aware and vigilant, for example stay away from open areas in lightning.

The more time you save in an emergency situation, the more likely it is you can save lives.  We’ve made it even quicker for you to inform your students and staff with these templates for five common emergency situations your school could find itself in the midst of.  Simply copy these into new templates in your DeskAlerts system. All you have to do is tailor them during an actual emergency event to include the relevant details.

Why you should consider DeskAlerts school alert system 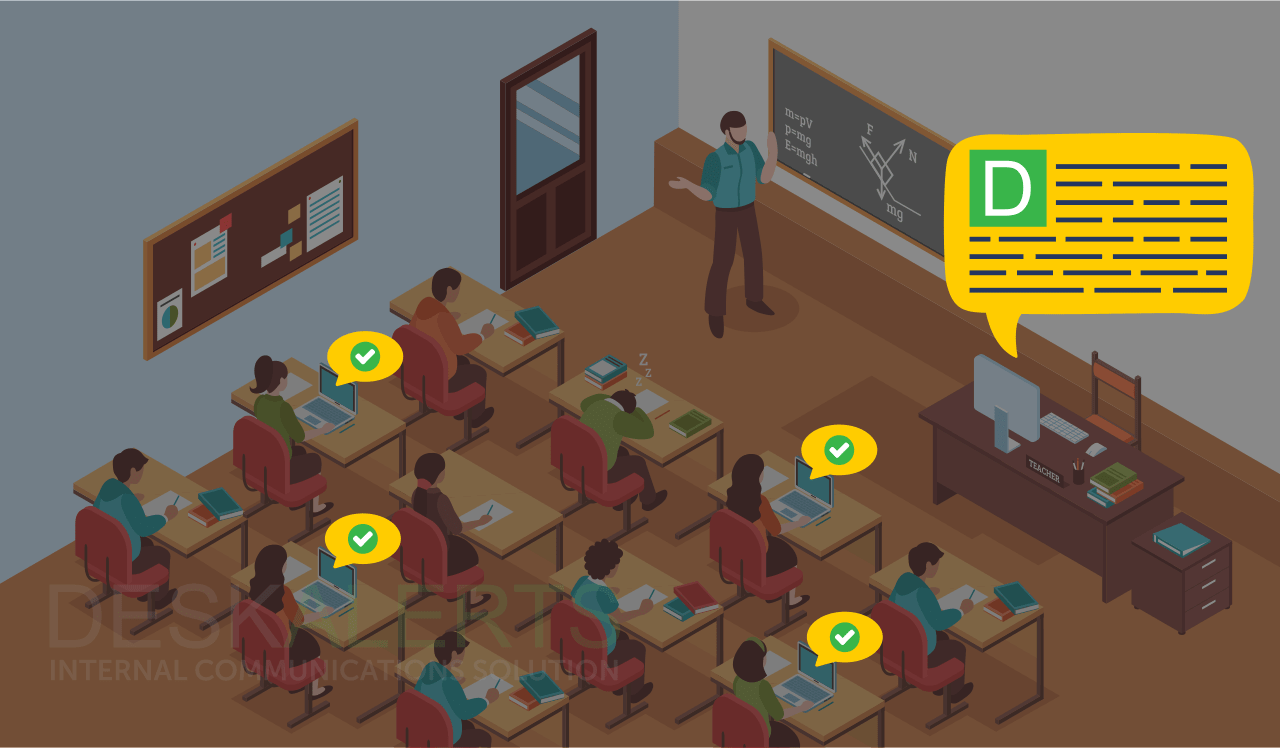 DeskAlerts is a proven emergency notification system for schools. It works by sending messages to computer and other screens as well as to mobile phones and tablets.

When you have a large campus or multiple campuses you may not need to let the entire organization know about the emergency situation. DeskAlerts school alert system has an audience segmentation feature that allows you to send only to those who are affected, for example the Engineering building or your campus in City A.

You can save even more time in an emergency by creating your own predefined templates that cater for a range of scenarios – all you have to do is fill in a few details during an actual emergency and hit send.

DeskAlerts school alert system can also be used for non-emergency communications, improving your return on investment when you use it to improve overall communications within your educational institution.

Features of DeskAlerts that set it apart from other mass notification systems for schools include:

DeskAlerts doesn’t alert trespassers to your response – when there’s an intruder, active shooter or other stranger causing issues they won’t hear sirens and warnings and won’t know you’ve alerted the campus.

Saint-Anne private school in Luxembourg was looking for a way to quickly deliver important notifications to classes during lectures. Before investing in DeskAlerts, they didn’t have any communications solution in place at all in the school. They needed a mass notification system for schools that could be used on both PC and Mac, and that would support and deliver multimedia content.

“We were looking for a software solution that could fulfil the requirements of a school announcement system,” said Victor Goncalves from the Sainte-Anne IT department.

“After trying a few solutions, we opted for DeskAlerts,” he said. “DeskAlerts allows the school director to transmit pre-recorded messages (text, audio, video) to the teacher’s computer in our classrooms.

“With an alert appearing on the screen, the teacher powers on beamer and speakers and plays the message to the students in his classroom,” Mr Goncalves said.

Henry Ford Community College is located in Dearborn, Michigan in the USA and has around 17,000 students. The school had been relying on email and SMS systems to send notifications to students and employees, which became problematic when phones would be switched off during class so as not to disrupt others. Email was also problematic as it relied on people actively checking their emails and there was no guaranteed they would look at the emails in a timely manner.

HFCC chose DeskAlerts as its school notification system and has deployed it to every employee workstation and student computer on campus.  The school can compose alerts and broadcast them to 2000 different workstations in minutes.

Connect to students and staff in emergency situations immediately with DeskAlerts

Talk to our team of experts about a tailored solution for your school notification system you can purchase.