Is Your Company Prepared To Deal With An Active Shooter Situation?

With mass shooting incidents seemingly on the increase across the United States, many businesses and other organizations are turning their thoughts to the subject of gun violence and keeping their people safe during an active shooter incident.

According to the Gun Violence Archive, there have been more than 250 mass shootings in the USA in 2019 alone. These statistics include scenarios where multiple people have been shot and injured or shot and killed.

As we’ve seen in news reports, active shooters can strike at any place at any time. It could be at a school, a concert, a shopping complex, a church or an office building.  There is often no warning that this is going to happen.

Figures from the United States Bureau of Labor Statistics show that around 10 % of all fatalities in the workplace are a result of homicide, and 79 % of workplace homicides are the result of gun violence.

A separate FBI report identified that 45 % of mass shooting events over a 13 year period to 2013 took place in a commercial environment.

Is your company prepared to deal with an active shooter situation? Pass the test!

If your business is not prepared for the likelihood of becoming embroiled in an active shooter situation, you could be further risking the lives and safety of your employees and other stakeholders.

In fact, if you aren’t prepared you may be in breach of the federal Occupational Health and Safety Act (OSHA) which specifies that employers have a general duty to provide their employees with a safe workplace free from any recognized hazards that could cause or are likely to cause death or serious injury.

We recently heard from a DeskAlerts client who had literally only just deployed the DeskAlerts emergency alert system across their organization who had to use it for a real-life active shooter scenario just two hours later.

The client needed to evacuate employees in a calm and efficient manner and then was able to send emergency alert notifications to computer screens that provided clear instructions so everyone could safely evacuate the building.

This story highlighted to us the need to be prepared for any scenario, and how unpredictable gun violence is – it could strike at any time.

Having a plan in place, and the right tools to equip you to deal with an active shooter situation can help you to save lives if you are confronted with one. 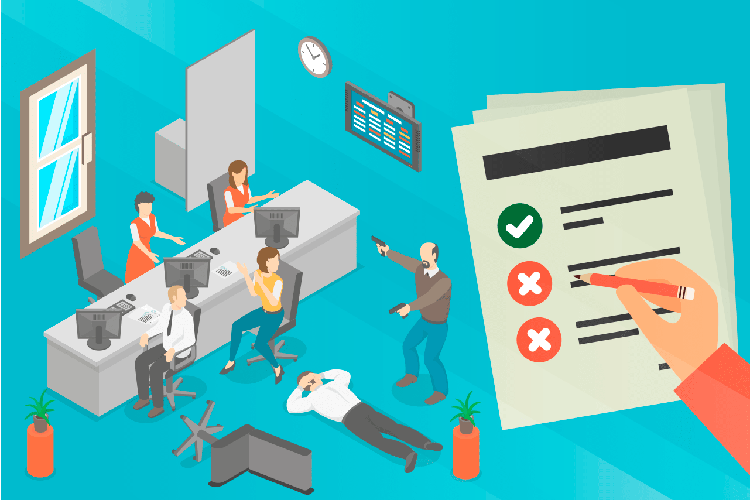 Here are the steps that your organization should take:

Like any other emergency or disaster situation such as a fire or earthquake, having an emergency response plan in place for the event of an active shooter will allow people to understand what steps they may need to take if they are actually confronted by this situation in real life.

Your plan should be clearly communicated to your employees and they should be easy to understand and find.

2. Train people on what to do

Having a plan is a great first step, but you need to be able to have an idea of how successful it would be. Running training scenarios such as an active shooter drill will help you to determine if your plan needs to be refined.

It also gives people a chance to practice how they would respond – if they can run if it is safe to do so or if they need to hide – so if they are confronted with a real live situation they will be able to react accordingly.

While it isn’t always practical to run regular drills, ongoing education and information and reminders can be sent to employees to keep the information front-of-mind.

3. Invest in an alerting system

DeskAlerts works by sending pop-up notifications straight to employee desktops regardless of what software applications they are using at the time and even if a computer is on standby or screensaver mode. Alerts can also be sent to mobile phones and tablets.

In an active shooter situation every second counts when you need to get people to safety.  With DeskAlerts you can instantly send messages to all employees alerting them to an emergency situation via a “panic button” on an administrator’s desktop, or via a mobile phone app.  This method sends information from a pre-defined template that alerts people to the presence of an active shooter.

If there is time, you could also send a message with more detail: “An active shooter with (physical description of offender) has been reported at (location). People in this area should leave immediately if it is safe to do so, or hide.”

Employees who are offsite who receive notifications on their smartphones and tablets will also know to stay away because there is a deadly situation they need to avoid.

4. Determine what to do following an incident

If a situation is resolved and is all clear and safe for employees to return, and is not a crime scene, you should alert people to the fact they can return.

If things didn’t go so well, immediately after an active shooter incident you will need to follow up to determine which employees, if any, are injured or deceased.

With DeskAlerts you can see who has seen notifications and who hasn’t, which is a good starting point if there is some confusion.

Protocols for alerting family and next of kin should also be developed and followed.

You may need to provide counseling to traumatized employees in the days, weeks or months following an incident.