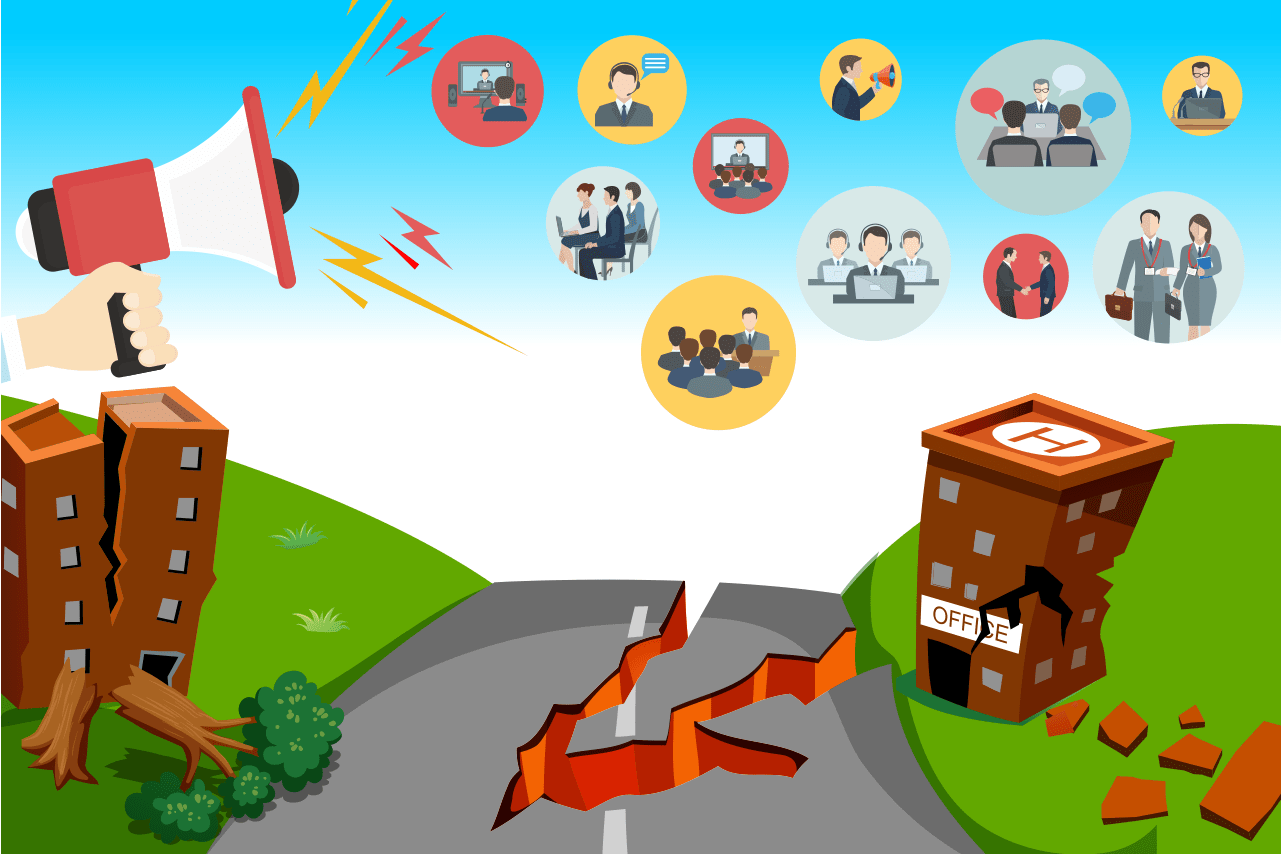 In many parts of the world, the ever-present threat of earthquake is part of everyday life.  In recent weeks alone there have been earthquakes of over 5.5 magnitude in Turkey, Indonesia, New Zealand, Taiwan, Chile, Afghanistan and Japan.

The United States Geological Survey reports that every year in southern California, there are around 10,000 earthquakes recorded. And while most of these quakes are so small they can’t even be felt, around 15 to 20 every year are greater than a magnitude 4.0.

Larger earthquakes often produce aftershocks that can reoccur for many months after the original quake, posing an ongoing threat to safety.

When you live in an earthquake-prone area, it should come as no surprise that your business and employees could be affected by a quake, and having plans in place to deal with earthquakes are necessary.

Earthquakes often occur without any warning, meaning people need to react very quickly when they happen and know what steps to take to ensure they remain safe throughout the ordeal.

An alerting system, such as DeskAlerts, can help you to prepare for the event of an earthquake and also when one occurs to instruct your employees to take steps to remain safe.

The alerting system can form a core part of your Emergency Action Plan. It works by sending pop-up notifications to computer desktop screens that cannot be skipped or ignored and can also send push notifications to smartphones and tablet devices.

These messages can be sent quickly and easily, using a predefined template, reaching all employees instantly.

Other systems you have, such as warning sirens, can also work alongside or even integrate with your alerting system, giving you a more holistic emergency warning system.

When you invest in an alerting system to help communicate with your employees in the event of an earthquake, here are some of the ways you can make the most of it:

How to choose an emergency system, free infographic:

1. As part of your training drills

Training staff on what to do in the event of an earthquake can help them to stay safe both during and after a quake – reducing the risk of injury or even death.

Regularly conducting earthquake drills – where you run a mock scenario where everyone acts as though an actual quake has taken place – can help prepare your people for the real thing.

Use your alert system to send messages to your employees advising there has been an earthquake (but make sure you are clear that it is a drill) and then give the instructions you would like them to follow.

You can run a range of drill scenarios including for aftershocks and tsunami warnings that often follow a significant earthquake event.

Features of your alert system that can be used for this include:

2. Reminders about what to do during an earthquake

Because you don’t know when the next earthquake might happen, it’s a great idea to send regular reminders to your employees about what to do to remain safe in an earthquake so they can react accordingly, and quickly, should one take place.

In an earthquake the shaking of the ground itself is seldom the cause of any injury. Casualties occur as a result of collapsing buildings, falling objects and flying glass.

The recommended course of action during an earthquake is “Drop, Cover and Hold” – drop to the ground, take cover under a sturdy piece of furniture, and hold on to it until the shaking stops.

You can create ongoing education campaigns reminding people of these simple steps to take in the event of an earthquake and deliver them using your alert system’s features. 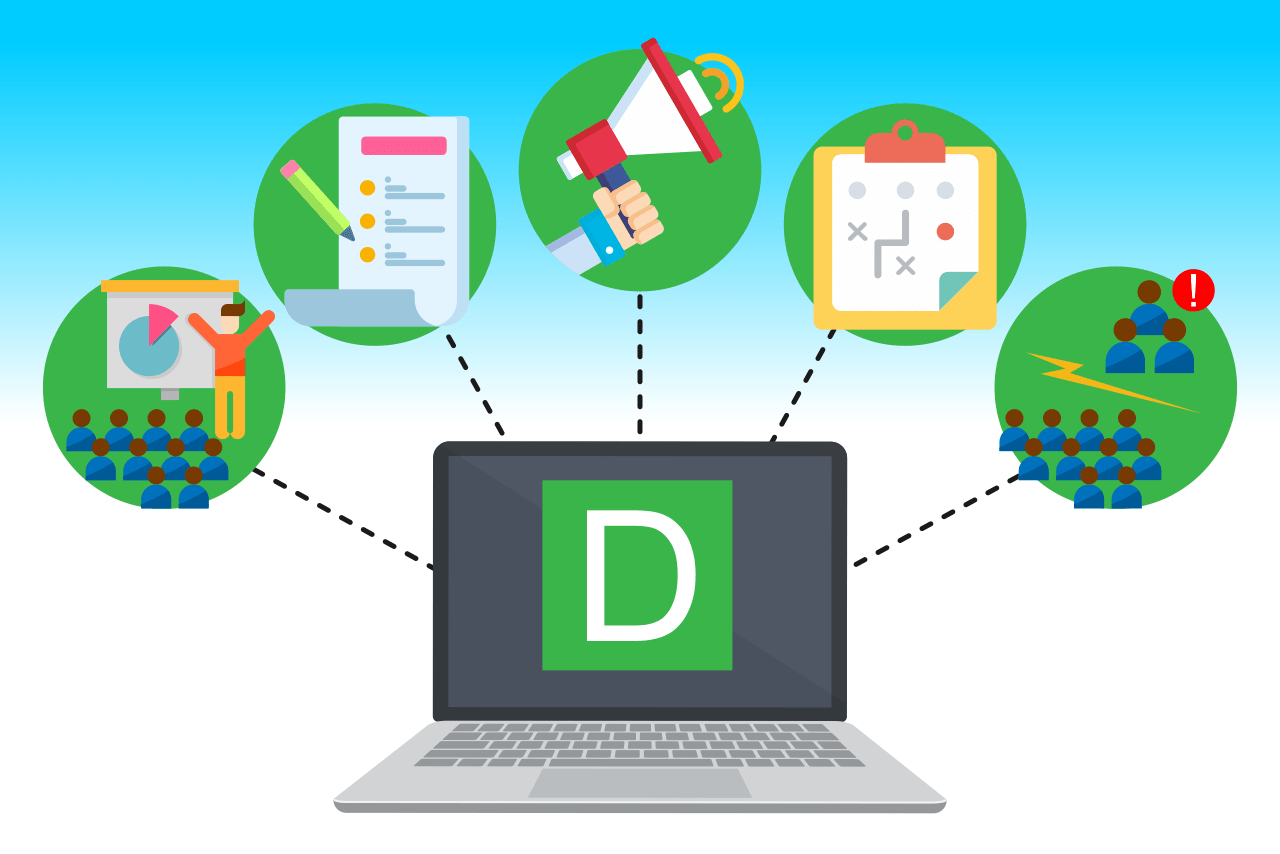 3. Instantly notify employees in the event of an earthquake

When there is an earthquake there is often little-to-no warning and every second will count in order to communicate with employees about staying safe.

You can create these predefined alerts in advance, reflecting the most common scenarios your business may want to alert staff about, such as an earthquake.

Additionally, you can send a one-click alert through a mobile app if you aren’t at your computer.

Features that can be used for this include:

You can send images and video as well as text instructions using the alert notification system.

Images can include visual step-by-step instructions of what to do during an earthquake, and can even show pictures of safe places in your business environment as well as maps that show areas to avoid (for example where windows and glass are). You can also show evacuation routes that employees can take once the quake is over and it is safe to move.

Visual representations can be a powerful way of communicating, especially when people don’t have a lot of time to read information.

These images containing life-saving can also remain on screens via the lock screen alert feature. Messages can be sent to computers that are on standby or screensaver modes meaning the screens don’t have to be initially active in order to carry this information for your employees to see.

Features that can be used for this include:

5. To know who is safe and who may be in danger

DeskAlerts has an in-built statistics module that lets you easily see which employees have seen your emergency alert notifications and which ones haven’t.

In the aftermath of an earthquake, you can use this feature to follow up with employees who haven’t seen the alert to determine if they are safe or not. It may be they weren’t at their desks at the time of the alert being sent, for example.