When a test engineer named Neil Papworth sent the very first text message in 1992, little did he know that it was the start of one of the most popular communication tools in human history. According to a Bloomberg report, more than 8.3 trillion text messages are sent every year. That translates to 23 billion messages a day or around 16 million messages a minute.

Those figures emphasize how widely used short messaging system or SMS has become. In fact, companies, educational institutions, and other organizations use SMS to communicate with their employees, students, citizens, and other stakeholders. A text alert system can be most effective in sending time-sensitive information to large groups of people.

An advanced text alert system is one that is easy to use but powerful enough to send hundreds of text messages per minute. It is employed by companies for sending emergency alerts to their workers during inclement weather, terrorist attacks, and earthquakes. It can also be utilized for not so urgent yet equally important messages such as IT advisory and changes in staff schedule. 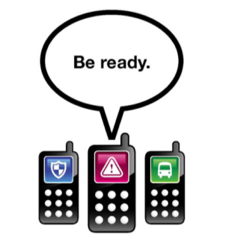 While text alert system programs may vary in features, but most of them have similar functionalities such as:

This is a feature that is appropriate for sending reminders to the staff such as deadlines and schedule of meetings. Text messages can be sent at a particular time or date, like an hour before a scheduled videoconference or 30 minutes before an organization activity such as a product launch.

Administrators of an advanced text alert system have the option to send an advisory or reminder to groups. This saves time on the part of the administrator as messages don’t have to be sent to many individuals. Moreover, messages are only sent to the appropriate department or unit in the company. For example, a training reminder will only be sent to participants of a workshop, and not the entire organization.

Text messages sent through a text alert program can be read in all types of mobile phones, from the latest smartphones to cellphones almost a decade old. We’re talking here of iPhones, Android devices, Blackberry handsets, and even old phones. With this feature, a text alert software can be used to reach any employee or student regardless of the phone he or she has.

Administrators can also choose from message templates. These templates cover a wide range of message topics, from reminders to emergency alerts. Emergency alert templates are particularly useful during critical situations when management has to notify its employees right away of inclement weather requiring immediate evacuation.

6. User control can be accessed anywhere

Administrators of a text messaging alert system can access a remote dashboard where they can send an advisory or alert wherever they may be. Moreover, advanced text messaging alert software is typically user-friendly that even employees with limited knowledge in IT can be assigned to use or manage the system.

With the many features of advanced text alert system, there’s no surprise why many institutions see it as a practical and reliable communication platform especially in times of distress.